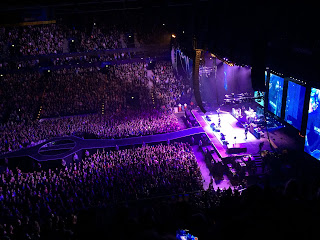 we went a second time this year to see the foo fighters playing. their show last night in hamburg was amazing, it was the best one i’ve seen from the band. they have played a long set, close to three hours across twenty years of band story – hard, loud, slow, strong, acoustic, and all times authentic. from the very first second, as they appeared on stage, 12,000 people stood up, and everybody was standing on their feet until they gone. it was bliss and electrifying. a rush of adrenalin. and i still feel so happy.
Libellés : foo fighters rock concert