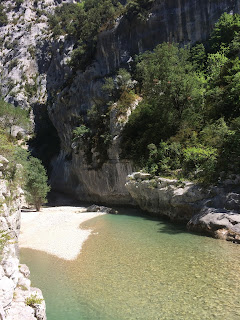 today’s featured image: la mescla – where the verdon and artuby rivers meet. a detour off the martel track in the verdon gorges.

so, this is what's been up since that awesome night with my friends the foo fighters in hamburg…

june rocked hamburg. slash featuring myles kennedy & the conspirators were playing here too, and obviously we went to the show. great gig.

july didn't brought us the summer as expected. hamburg was mostly stormy and felt cold. the fact remains that now, we're trained to run under pouring rain ;)
we had an aussie migration consultant evaluating our chances for a permanent residency visa in australia, but the assessment results were not too optimistic – meaning a race against time (let's face it: we're too old), a lot of money and stress, and at the end no guarantee to be welcomed to stay – so, sadly, we've decide to abandon the project of spending the rest of our lives down under. instead, we switched to plan b, also called merano in south tyrol.

we went for three days in lesconil, brittany, to celebrate some round number birthdays of family members. it was rainy and chilly, except on this very sunny afternoon hike at the end of the earth, aka the pointe du raz, food was too heavy on butter-cream-eggs, and i was in withdrawal of veggies. at the end, it was the first time for ages i was so happy to land back in hamburg.

august brought a kind of summer, but nothing like pure blue sky at dry 35 °c, either stormy, muggy… we spent a week in the tiny village of trigance in the provence, surrounded by nature, hiking up and down in the gorges du verdon (old habits die hard). we enjoyed the silence and the beauty of the nature. wonderful as usual.

then life headed new ways. one of us dropped out of his big company job on june 30th, and so did the other one with her freelance translation activity some months later. actually, for my well being, i've decided to spend less time with all that crazy being connected computer lifestyle, and more out there in "real life" with people in the flesh… and today, here we are on siesta key. a last-minute unexpected trip to enjoy the sunshine and the beach before life gets us in the whirl of new challenges and the cold months take over in hamburg.

it's going to be a long winter. but 2015 has been the sunniest year of my life :)
abroad foo fighters hamburg hiking hot rock concert siesta key slash sun